Hello. Welcome to the first in a series of indefinite length where I examine an older, obscure game in my collection. You hopefully noticed this post has some content warnings -- this game is tabletop RPG of piracy from 1979, and isn't shy about some of the nastier parts of a piratical life.

This post will be an exception to my planned future examination posts, in that I do not (as of yet) possess a physical copy of this game. I am instead examining a PDF copy of the game I was provided for research purposes from The Strong National Museum of Play. I am still on the hunt for this one -- if you're selling a copy, please get in touch with me! (My email is at the bottom of this post.)

Buccaneer: A role-playing game of Piracy

Written by Carl A. Smith

Published in 1979 by Adversary Games

Contents: one 16-page digest-sized booklet, bound in one of two known covers: 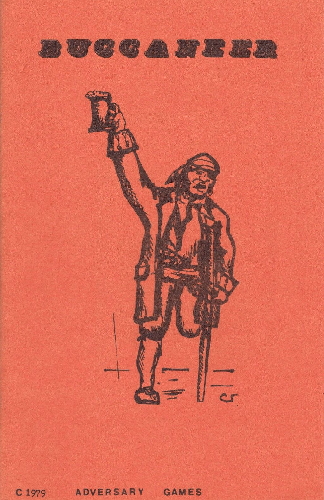 Buccaneer is a tabletop RPG rule set from the fairly early days of RPGs. Dungeons & Dragons was only published in 1974 -- five short years before this booklet was released. It appears to have been aimed at players of either DnD or other RPGs and wargames, since it does not explain much in the way of how to use the dice, or how to roleplay in general -- which is common for games of this vintage. Descriptions of mechanics that follow are a bit simplified, for the sake of brevity.

"Buccaneer is a tactical, role-playing game of piracy during its golden age, circa 1600-1830. Each player will generate a character and then manage his career to try and make him the most famous in his chosen profession."

Character creation is fairly simple. Players must first select one of three careers -- pirate (later referred to in the rules as buccaneer), privateer, or regular navy -- and then generate their 10(!) statistics by a roll of d20 in order. Statistics include Constitution, Strength, Dexterity, Intellect, Arms Ability with Guns, Arms Ability with Contact Weapons, Naval Ability, Charisma, Comeliness, and Cunning. Some of those are quite a mouthful. Of note, a player character's Comeliness is a literal numerical representation of that character's sex appeal to the opposite sex.

The three character careers dictate how the PCs develop over time. Buccaneers/pirates can start off as either an able-bodied seaman or possibly a ship surgeon, depending on their starting statistics. From then on, their only hope for progression is through either trial by combat, or the death of a superior in battle -- which is abstracted away as a simple 1-in-6 chance. If two Buccaneers try for promotion at the same time, they must fight to the death. A bit heavy handed, but it works for the genre. Buccaneers also must care about their public image. A Buccaneer may have a 'bad' image (which grants them bonuses in ship combat, but a penalty on being hanged), or a 'good' image (which provides the converse). To maintain such an image, the PC must consistently perform certain negative or positive actions on the people they capture. Good actions are fairly mundane, and fit the genre -- never take a lady's jewelry, aid sick and wounded enemies, etc. The Bad actions however are quite a bit more distasteful -- rape, torture and murder of captives, massacre of unarmed or surrendered enemies... all the nasty bits that probably would be left unsaid if the game were published today. But one must note, historically many pirates were quite brutal, despite our modern cinematic/romantic lens. These were not good people... but having that enforced mechanically is perhaps a step too far in today's world.

Privateer classed characters are effectively legalized pirates -- ones granted a letter of marque from their government to pirate and plunder enemy vessels during times of war. To become a Privateer, a character must own a vessel or be signed aboard one, and then they must acquire said letter of marque on a 3-in-6 chance. Failure to acquire the letter of marque three times will force the character into a career of Piracy instead. Privateers also have to worry about public perception of their actions -- after each expedition, they have a chance to be declared a Pirate by their government, rendering their letter of marque null and void. Privateers will always start as able-bodied seamen, and may advance to the rank of captain, but never any higher.

PCs in the Regular Navy of their country will rise through ranks at the end of each battle, mission, or other assignment, on a 1-in-6 chance. However, there's also a 1-in-6 chance of a superior becoming jealous and attempting to have the player court-martialled. Navy PCs also have the possibility to pay for promotion opportunities, to represent study and training above and beyond the requirements. In this case, promotion is a 3-in-6 chance. A Naval PC could start play as high as midshipman in rank, and has the potential to eventually be promoted all the way to Admiral of the Fleet.

Mechanically, this game shows signs of being an early RPG design -- checks of different types, seemingly a different core mechanic for most everything. There are affordances for differing language capabilities -- the Intellect of a character indicates how many languages they speak. Deception is a d10 roll-under-or-equal check on the difference between the two characters' Intellect -- which has an odd side-effect of a low-Intellect character having a better chance fooling a genius than deceiving someone more their own speed.

Close-quarters combat with melee weapons is handled by a to-hit d20 roll, with a difficulty determined by adding the attacker's Strength and Arms Ability with Contact Weapons, and subtracting the enemy's Dexterity. Some wrinkles are added by having three attack modes -- thrust, slash, hack -- and a parry option. Damage dealt relies on a weapon type/attack mode matrix, and is dealt directly to Constitution. Seems rather competent compared to other games from the era!

Ranged combat with guns is handled similarly, but does not involve the target's statistics in any way. A d20 target difficulty is determined by adding a PC's Arms Ability with Guns to their Dexterity and dividing by 2. If there's a hit, cross reference the gun type with the range on the gunshot damage chart to determine damage. Interestingly, ranges are listed in inches, and alternately referenced in hexes, even though the game doesn't explicitly state anywhere that it expects the use of miniatures. Games of the period just assumed players were familiar with wargaming.

Ship-to-ship combat is recommended to be abstracted unless only two ships are participating -- the rules only cover one-on-on ship combat here. Ship combat takes the form of multiple rounds at increasingly close ranges -- range determines the type of damage possible and how difficult it is to score a hit. All rolls are d6 on tables for this type of combat.

Boarding can occur if ships get within 1" of each other. A d6 grapple roll is made, with bonuses for how damaged the target ship is. Once grappled, boarding actions occur as a series man-to-man combats.

The rules finish off with a d10 battle wounds chart -- each PC receives a new wound on this chart after each engagement -- only a 40% chance of escaping unscathed, 50% chance of losing a limb, eye, ear, or hand... 10% chance of getting gangrene and dying. Yikes. Pirates led short lives, for sure. Then there follows a quick cargo chart, a random encounter chart, some specifications for common ship types, and a short section on Duels, for honor or death.

An interesting design, but not one I'd love to play, I think. It'd be neigh impossible to have a lengthy campaign following the same characters, given the brutal battle wounds chart. But if the group adopted a troupe-style of gaming, with a large stable of characters, perhaps it could work. You're never going to regrow that hand, though. I absolutely do not agree with the mechanical enforcement of bad characters doing terrible things, but I understand the mores of the time this was published were significantly different, and I also understand that pirates were pretty terrible people on the whole.

I came across this game while researching for a design that I've at the moment put on hold, but I am absolutely glad I did. It's a fascinating look at early tabletop gaming -- and it lives in that weird niche I love right between wargaming and roleplaying. But moreover, it also led me to discover another RPG that I'd love to play some time, and intend to cover here in the future -- Crimson Cutlass.

I'd like to thank The Strong for providing me the PDF scan of this game.

Want to discuss this post? Feel free to drop me an email :)